Tarot and the color black are two of my favorite things so when I discovered a deck that was designed to be a perfect fusion of the two I pre-ordered it as soon as I had the chance. It is dark, mysterious, cosmic, and poetic from it’s self-described timeless art style to the delicately chosen symbolism found both on the cards and within the accompanying guidebook.

From the mind of designer and illustrator, Arthur Wang, comes a deck worthy not only of avid tarot readers and deck collectors but also of art lovers and admirers of elegant design.

The 79-card deck is held inside a foil-stamped book-style box that gently, but securely snaps shut with a magnetic closure. The entirety of the outside and inner flap of the box is decorated with a textured and reflective starmap.

The cover includes the name of the deck, of course, while the inside of the flap has one of Martin Luther King’s most iconic and thought-provoking quotes. The quote serves as a prelude to the reflective quality of some of the deck’s intricate detailing that shines against the black card finish.

Unlike other decks that come with replaceable card boxes that tear easily and offer hardly any protection to the deck or boxes too bulky to store and travel with, the True Black Tarot offers a keepsake box that will keep the cards and guide booklet safe, be an appropriate size for both display and travel, and serve as a statement piece in and of itself that anyone would be proud to own.

Card Back and Card Stock

The art on the back of cards is typically not as important as the key artworks on the other side of them, but even still the card back design for this deck is the most aesthetically stunning I have ever seen and as of yet there is nothing else on the market that quite compares to it.

The foil-stamped starmap across a pure matte black background looks like a secret blueprint of the heavens. It’s a testament to the creator’s attentiveness and care, and is sure to intrigue any reader to find out what visuals await on the other side.

The card stock, according to the product website, is 50% thicker than a standard RWS deck, so if you’re a stickler for cards that are easy to shuffle Riffle and Bridge style then this may be something to keep in mind when considering making the purchase. The creator intentionally chose such an uncommonly thick tarot card stock as his hope was that each individual card would be able to last the wear and tear of time and the elements.

The cards were manufactured to be scratch resistant and splash resistant with a velvety-soft feel and hand-edged in black paint, a remarkable feat for a deck of cards.

Though I agree with the creator in calling his art style timeless, I would logistically classify it as life-like with a three dimensional quality that leaves plenty of room for fantasy and inclusive ambiguity. The play of shadow and light throughout each piece feels as though you could almost reach out and touch the imagery.

Wang described the artistic direction of his illustrations as “a style that refuses to be placed in any specific era or time, each card emerges from the darkness a story in itself, embodied in a painting that is both ancient and contemporary.“

Mood wise, I would say the deck has a fiery and assertive personality given the bold accents of golden yellows and scarlet reds, the deepest black that gives depth to every detail, and the light-catching gloss designs on all 22 of the Major Arcana cards that call for attention.

The guidebook is small in the sense that it was made to fit inside the card box but it is filled with all the information and insight a tarot reader would possibly need or want to understand the symbolism unique to the True Black Tarot deck.

At the heart of the deck’s messaging is the interconnectedness of all, and the unifying way in which humans throughout every land and epoch have looked to the stars for guidance, omens, and tales.

Given Wang’s fascination with anthropological folklore, paranormal studies, and witchcraft from numerous time periods and geographical locations, “the marriage of his occult studies with his design background was an easy connection to make,” as he put it on his About page.

The level of careful thought and cosmic reflection that he put into the creative and literary aspects of this deck are as evident in his art as they are in his words. Should you desire to learn the meaning of the cards from Wang’s perspective the guidebook will provide that, but each card artwork also invites readers to develop their own intuitive interpretations overtime.

Red is technically my favorite color if black isn’t an option so it’s no wonder that my favorite card in the deck, Judgement, includes an angel-winged figure with knee-length red hair blazing behind her. The Lovers card, which is also heavily accented with red, holds a comfortable spot amongst my favorites as well, but honestly the art quality is unwaveringly spectacular throughout the deck that it’s difficult not to love them all.

The Devil card (pictured at the very beginning of this article as the cover image) also deserves a highlight as I have never seen a visual interpretation of the card that exudes such striking awe – from the wings and floating crown of gold to the four armed figure to whom the wings belong hovering amongst dripping, gold chains, it is a work of art I would be proud to display in larger form on my wall.

The Sun and Moon cards possess illustrations entirely unique to the True Black Tarot of their own, and the iconic Three of Swords depicts a heart that truly looks as though it once belonged to something living.

I could continue describing everything I admire about this deck but I would need to go through all 79 cards to accomplish that task, so instead I will leave you with my clear and fervent adoration of the True Black Tarot and the mystery of what magic and light still await within this deck’s star-filled darkness. 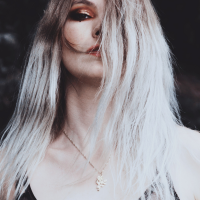 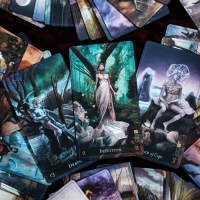