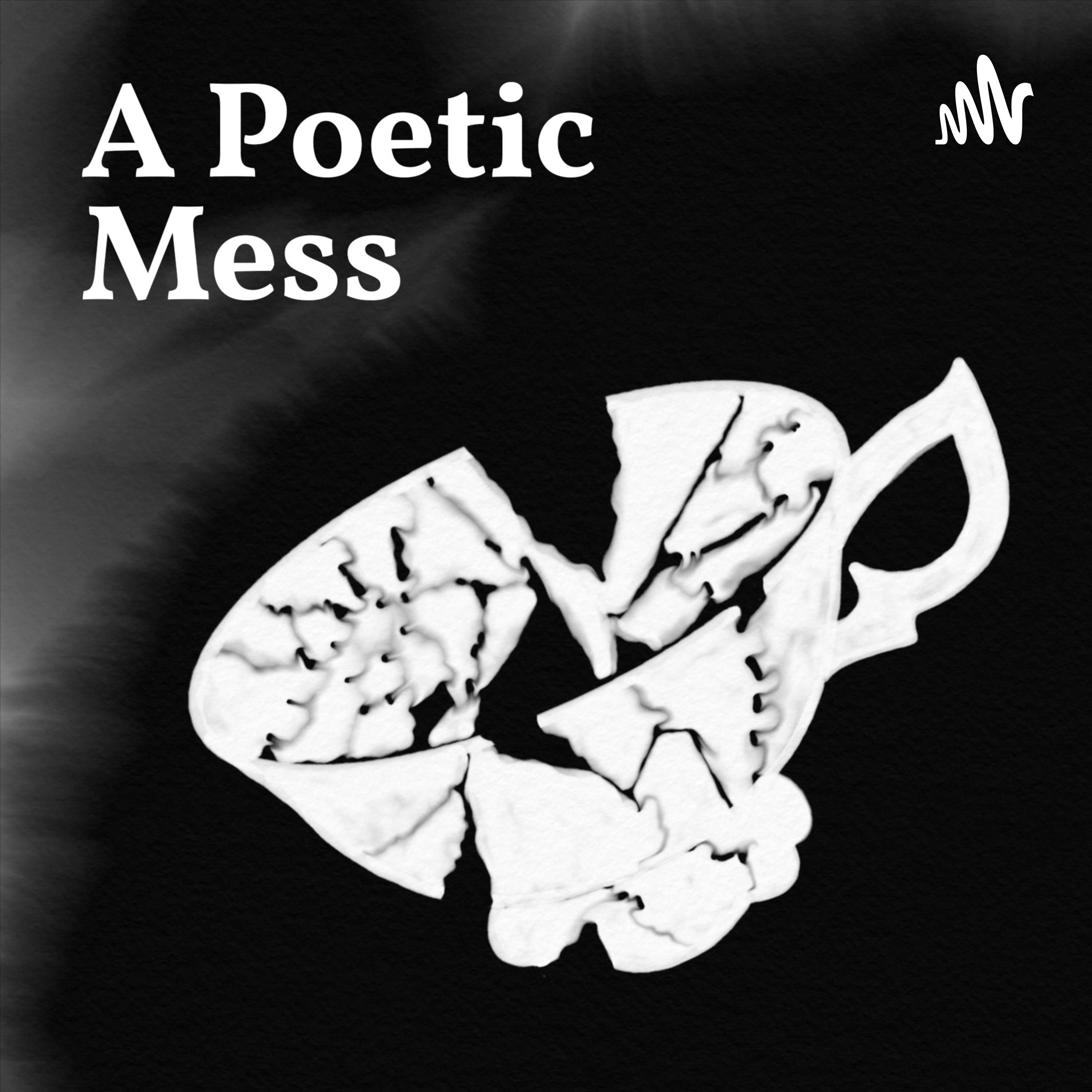 Dark Poetry and the Horror Genre – A Poetic Mess

Happy Halloween, the day has arrived early on our podcast because the theme for our writing today is haunting words. And we are going to dip our toes into mulling over some eerie, horror-esque poetic inspiration and see if we can’t write our own haunting poem. Share your poems and follow me on all social media platforms @JynArro, and support the podcast at PayPal.me/ByJynArro

Can you believe we have arrived at our fifth episode? I know that’s not very much but anyone who’s ever undertaken a large and or long term project knows that every little milestone counts. Every little bit of consistency and effort makes you feel good, and when you feel good your creativity usually benefits as a result.

And, it sure does help that my favorite holiday is next week! Happy Halloween, the day has arrived early on our podcast because the theme for our writing today is haunting words. A challenge for me as someone who likes the friendly kind of ghosts, not the jump-scare kind. But I am going to challenge myself a bit for you all, and we are going to dip our toes into mulling over some eerie, horror-esque poetic inspiration and see if we can’t write our own haunting poem.

I do want to give a little trigger warning before we begin, there will be mentions of death, loss, abuse, internalized fears, and similar themes so if you are not in the headspace to listen to that then please feel free to skip this episode or come back to it at a better time.

Now, of course, we need to begin with the myth, the legend, the one and only Edgar Allan Poe. His short stories are creepier than any of his poems, in my opinion, but I thought I would ease us in with a sorrowfully, eerie work titled Annabel Lee, from The Works of the Late Edgar Allan Poe, Vol. II, from 1850.

Before I read this, I want to give a definition for a repeated word that we don’t commonly use: ‘sepulchre’. ‘Sepulchre’ is a place for a dead body or tomb, either cut in rock or built of stone.

Equal parts sinister and depressing, Poe is a master at seamlessly weaving supernatural elements into most everything he wrote and this poem is no exception. Heaven and hell, demons and angels, these places and figures of lore and myth (depending on what you believe, of course) make the story within this poem an otherworldly one. There are forces beyond that of humans and mortals, those we cannot see, that kill Annabel Lee because they envied their love.

It is tragic, as is any piece of writing that explores themes of death and loss, and I find that the end can be interpreted in a few ways. That even in death our loved ones are not necessarily gone, or an inability for a person to move on from the dead, or, and this is the most optimistic, that our loved ones are always with us and we with them because death cannot truly separate those bonds.

You might be thinking I’m being super soft on the spook factor, and you would be right – in part because I’m a scaredy-cat, but I suspect I won’t be alone in that! Truly, though, I have a soft-spot for psychological, romantic, and gothic horror with a heavy lean towards drama and emotional plot points or themes.

This poem is a great reference if you’re looking for inspiration that isn’t over-the-top horror but rather makes the most out of its subtle language use to convey something dark and sinister. It’s a poem about the murder of their lover without ever even using the word ‘murder’ or any vivid descriptions of gore. Of course, you could always add that into your own poetry if that’s your bloody cup of tea…

I also think it exemplifies the anguish and emotional torture that is so often at the heart of horror stories, films, and shows. Those relationships and feelings filled with torment, grief, hatred, revenge, and all those unpleasant things and people we wish we could be rid of or have a complicated attachment to always make for the most fascinating creations.

Think of the villain you can sympathize with, the beast that might be saved or was once human, the bad guy who understands the world isn’t black and white. Horror can be over-the-top, campy, and even goofy at times but the most interesting characters and stories exist in the grey area. Think of Hannibal, the 2013 to 2015 television series, Interview With A Vampire, Dracula and its many explorative iterations, Mary Shelley’s Frankenstein, and so, so many more tales whose horror stems from the darkness within humanity.

If you are still having a tricky time with this prompt, let me read you a short, four-line poem that’s in Broken Reflections, the first part of Book of Mirrors, to help you start out small.

This is titled Cold:

The first line is graphic enough to visualize, and sets a heavy and horrific mood for the next three lines. There are the mentions of blood and bones, a bit of a staple for the genre and the reasons are obvious with their connections to death, mortality, violence, sacrifice, and taboo matters. I also create an unnatural picture for the reader with the imagery of a garden growing from my bones during the winter time, a physical remnant of the morbid betrayal that happened there. But I ended the poem at four lines because I felt there was a fitting finality to it with just that.

Longer stanzas and more words don’t always make our writing better, especially if we’re just adding to it for the sake of length. There were definitely poems in my book that were three or four times as long at one point, but, during the editing process, I cut them down because the extra lines took away from the meaning that was already there in a smaller word count.

Let me write up another example, that’s short and a little more wicked…

There is a story there, short enough to allow plenty of interpretation but its brevity still conveys darkness, vengeance, and horror, both those I’ve described and the horrors I’ve alluded to. Of course, that’s the other thing about the genre – it is intrinsically tied to our fears.

This poem was written purely from my imagination and in the moment for this episode, but it undoubtedly came so naturally to me because of the terror I have buried in my subconscious as a woman born and raised in a patriarchal society, under the near constant scrutiny of the male gaze, and with a hyper awareness of my surroundings as a means of self-preservation that many women develop.

Horror ultimately stems from and exposes our fears. In some cases, it reveals the ugly face of fears based in ignorance and misinformation, like the many horror films that involve the possession of a girl or woman by demonic forces due to the fact that she is no longer a “virgin” and thus no longer “innocent”… even though the very concept goes against biology since there are no legitimate physical signifiers of virginity or it’s absence. The movie, Jennifer’s Body, being the first example that comes to mind, where the sexually promiscuous high schooler is possessed, kills boys, and seduces the “pure” virgin girl (although, I do love Megan Fox).

Even the recent Penny Dreadful series that was led by the phenomenal performances of Eva Green, heavily relied on drawing a supernatural link between female sexuality, intimacy and carnal desires and evil, spiritual corruption, and devilish temptation. And this is a show that I really enjoyed, because let’s not forget we can still happily consume content while being able to have critical discussions and commentary on its shortcomings.

But as we have seen with films like Get Out, The Witch, many of the books written by Interview With A Vampire author, Anne Rice, and other works of horror in both literature and media, the genre also gives a chance for the marginalized, the misfits, those pushed to the outskirts to portray and write the fears unique to those experiences.

In the words of Pulitzer Prize-winning author Junot Díaz, “…if you want to make a human being into a monster, deny them, at the cultural level, any reflection of themselves.”

I invite you then, to look inward to find the haunting words for your poem as that is what may come the most naturally to you and maybe even unveil fears you didn’t know you had. But it doesn’t need to be a scary writing process, at least not to you, because as you could tell from the poem I wrote and specifically the lines: Mirror shards showed bruises not mercy in me / I bared my fangs with bloodlust glee; my monster has been battered but not broken, and now she gets her revenge on the true evil of this poem – the one who abused her.

Horror can be quite a misunderstood genre, I think, and in no small part because it has been exploited to turn marginalized groups into unsympathetic monsters while, simultaneously, giving the spotlight to male monsters who get far more nuance in the way their stories are told. Dracula, the lake monster, Frankenstein’s Creature, Psycho, etcetera, and even then it is also not uncommon to hear of monsters who became what they are because of the abusive mother or other evil womanly figure.

Many monsters and villains are also heavily queer-coded if not outright established as gay, Carmilla, the lesbian vampire, is a prime example. But as a bisexual, Xicana woman myself, I can tell you there is much to be reclaimed and unraveled in the realms of horror, and poetry has always been a way for creatives to serve our hearts on a platter.

Thank you for listening [or reading] and I cannot wait to continue to write with you, my fellow poetry lovers and pen wielders. Please share your poems with me on Twitter or Instagram using hashtag #apoeticmess. My first poetry book, Book of Mirrors, is out now on Amazon. And you can stay in touch, read my poetry and other works @ JynArro across all social media platforms and jynarro.com.